Congratulations On Your Order!

Would You Like 2 MORE Bottles of Turmeric for Free?

Congratulations on making the smart decision to pick up your copy of the Menopause Belly Support System with Turmeric.

For today only, we'd like to give you the opportunity to add to your savings by getting another 2 bottles of turmeric absolutely free.

That means that in addition to the incredible $217.98 average savings you got if you purchased the 3 or 4-bottle offer of Turmeric Curcumin No. 1 in the previous order page, you're also claiming 3 more bottles of our Advanced Inflammatory Defense supplement for the price of just one.

Supply is limited & they will go fast!

This is a one time order today only. No future charges will be made because you are NOT subscribing to anything.

Curcumin is the active ingredient within Turmeric, an ancient botanical that has long been used in both Ayurvedic and Chinese medicines as a natural defender against the ravages of inflammation for thousands of years.

Countless studies have shown time and time again that it’s clearly one of the most remarkable and researched super healing spices on the planet.

Shown To Help Support A Healthy Inflammation Response - Curcumin is a powerful and proven natural antioxidant that assist the body in inhibiting the two enzymes that cause inflammation. From Harvard Health to Time Magazine, the evidence is very clear that inflammation is not only linked to weight gain but nearly every western disease and dreaded symptom that we associate with “getting older”

Shown To Help Support The Body’s Response To Oxidative Stress & Free Radicals - Studies confirm Turmeric curcumin is a powerful and potent antioxidant. It is well known that antioxidants can help enhance the body's natural ability to defend against free-radicals which have been shown to accelerate cellular aging. Emerging research also links curcumin to have beneficial effects on elastase, a key enzyme that reduces the ability of elastin from forming. Elastin, along with collagen, is a protein your skin needs to look and feel smooth, pliable while retaining its original position when pinched.

Shown to help significantly decrease aches, pains, and swelling - In a rheumatoid arthritis study, curcumin was shown to be even more effective than an anti-inflammatory (NSAID) in helping reduce joint discomfort, swelling, and stiffness, so you stay active for the long haul.

Shown to Help Support Brain Health, Memory & Mood - Studies show turmeric curcumin helps support the stimulation of the brain hormone BDNF, which encourages the growth of neurons and helps various degenerative processes in the brain. Curcumin has even been shown to possess benefits comparable antidepressant. A study in 60 depressed patients showed that curcumin was as effective as Prozac in supporting the body’s ability to defend against the signs of depression naturally.

Shown To Help Support Heart And Cell Health - It is well known that endothelial dysfunction is a major driver of heart disease. Several studies suggest that curcumin may help support endothelial function. 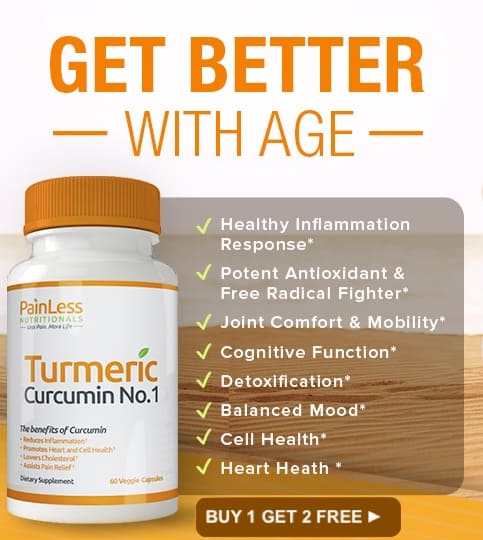 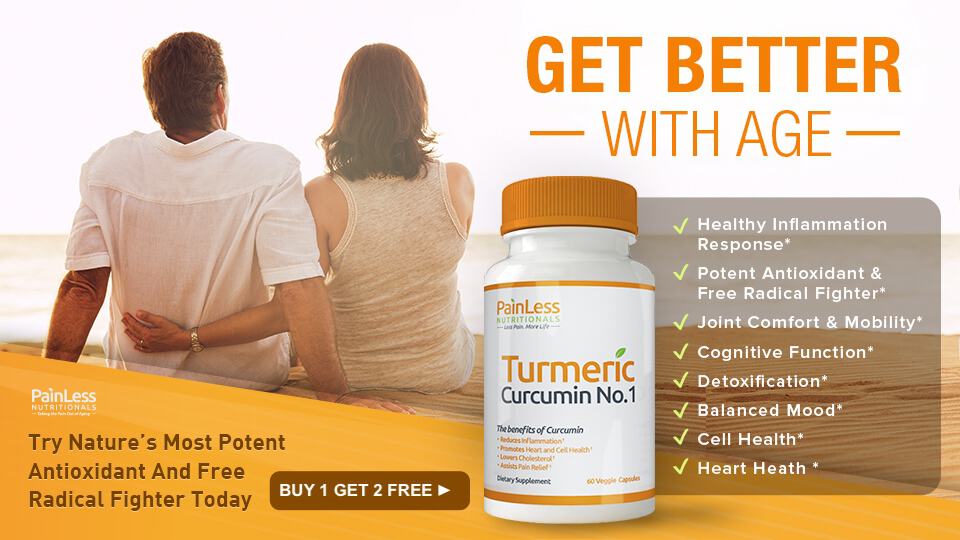 Q: Who is the Turmeric Curcumin No. 1 supplement designed for?

This supplement is for adult women and men who want to maintain or improve their already normal health and experience the benefits that may accompany that, such as weight loss, improved energy and clearer thinking. Turmeric Curcumin No. 1 will help middle aged and older adults, as well as younger adults who want to take better care of their health and help lower inflammation in the body.

Q: What makes this supplement better than the competition?

This supplement is 100% natural and made using only ingredients that are tested for purity and quality – no artificial fillers, flavorings, or colorings; just premium ingredients you can trust. This product is also made in the USA!

Q: How long will today's offer on this page be available?

Due to the popularity of this special offer supply is extremely limited and they will go fast. Unfortunately, today’s special offer can’t last forever and are not guaranteed past today.

Q: What if the supplement doesn’t work for me?

If you are not satisfied with your purchase you can request a full refund for up to 60 days from your date of purchase through our money-back guarantee. If Turmeric Curcumin No. 1 isn’t a good fit for you, simply contact us and we’ll gladly provide a timely and complete refund with no questions asked.

Q: I want to improve my health. What is the next step?

The first step is to click the order button above. You will be taken to our secure order page where you will provide your shipping and payment details. Once your order has been confirmed, you will be provided with specific details on when to expect your shipment.

Q: What are the ingredients in Turmeric Curcumin No. 1? 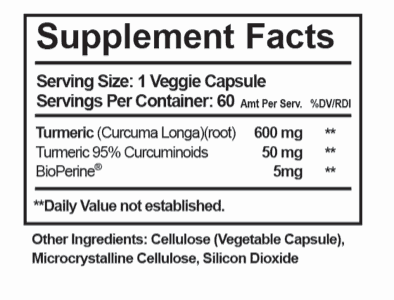 Q: How do I take Turmeric Curcumin No. 1?

As a dietary supplement, adults take two capsules daily, preferably with a meal.

KEEP OUT OF THE REACH OF CHILDREN. DO NOT USE IF SAFETY SEAL IS DAMAGED OR MISSING. STORE IN A COOL, DRY PLACE.

Do not exceed recommended dose. Pregnant or nursing mothers, children under 18, and individuals with a known medical condition should consult a physician before using this or any dietary supplement.

Q: Are there any side effects?

No, there are no known side effects of taking Turmeric Curcumin No. 1. It is made from all natural ingredients.

Please be aware: While there have been no reported side effects, you should always consult with your physician before taking any dietary supplement. Do not exceed recommended dose.

If you have a known medical condition or have questions about the advisability of taking this product, consult with your physician prior to using this or any dietary supplement.

Q: Is there a risk-free, money-back guarantee?

Absolutely. You can experience Turmeric Curcumin No. 1 first – THEN fully decide if it’s right for you. Try Turmeric Curcumin No. 1 on us for at least 60 days and after an honest try, if you’re not thrilled, simply send us back the product and receive a complete and speedy refund – even if the bottle is empty! So, rest assured you can complete your order today knowing that you’re 100% protected by our risk-free guarantee.

Q: How quickly will my order be shipped to me?

Our products typically arrive within 5 – 7 business days for orders within the U.S and between 8 – 15 business days for International orders. For tracking information and delivery status of your order, please contact us at support@PainlessNutritionals.com

Q: After I order today, will anything else be sent or billed to me?

Absolutely not. This is a one-time transaction today only. No future charges will be made because you are NOT subscribing to anything.

Q: How will my order appear on my bank statement?

Your purchase will appear on your bank statement from our secure merchant under the name “CLKBANK*COM”.

Q: Can I buy Turmeric Curcumin No. 1 anywhere else?

No. Turmeric Curcumin No. 1 is currently only available on this secure page. This way we can maintain our highly praised customer service and lowest rock bottom prices.

For today only, we're giving away an additional 2 bottles of our Advanced Inflammatory Defense supplement, Turmeric Curcumin No.1 FREE. That's 3 for the price of 1!

Supply is limited and they will go fast so act now!

This is a one time order today only. No future charges will be made because you are NOT subscribing to anything.

These statements have not been evaluated by the Food and Drug Administration. This product is not intended to diagnose, treat, cure or prevent any disease.

ClickBank is the retailer of products on this site. CLICKBANK® is a registered trademark of Click Sales Inc., a Delaware corporation located at 1444 S. Entertainment Ave., Suite 410 Boise, ID 83709, USA and used by permission. ClickBank's role as retailer does not constitute an endorsement, approval or review of these products or any claim, statement or opinion used in promotion of these products.